‘Oluwale and Leeds’ is a photograph taken by local resident Rachael Loftus and featured in this month’s Artist of the Month review at Leeds Church Institute.

Every month local residents, craft makers and artists alike are invited to share their creativity at Leeds Church Institute on social justice issues including racial equality, cost of living, climate action and poverty.

This afternoon at Wednesday Lunch and Prayers, hosted by Leeds Sanctuary, we unveiled our January artist of the month. Rachael Loftus lives and works in Leeds and was awarded an MBE for her services to the city in the response to COVID 19.

Leeds Church Institute’s Faith and Creativity Lead, Bronagh Daly said “We are delighted to have Rachael join us today to unveil her photograph ‘Oluwale and Leeds’. It was very special to hear from Rachael about how she met with friends of David through her work 20 years ago with homeless people in Leeds. Art is very powerful and can challenge us to talk about difficult social justice topics like human rights and the impact of racism in our city.”

The words on the plaque featured in Rachael’s photograph read. “David Oluwale was a British citizen. He came to Leeds from Nigeria in 1949 in search of a better life. Hounded to his death near Leeds Bridge, two policemen were imprisoned for their crimes.”

David Oluwale’s death resulted in the first successful prosecution of British police officers for involvement in the death of a black person.

Speaking at the gathering today, amateur photographer Rachael said “I have never considered myself as an artist. I do believe however that it is important to share images and stories that are often hard to hear. It is wonderful to see a photograph I took as a permanent image on display, and start conversations about friendship and community, especially at a time when so many people in Leeds are marginalised.” 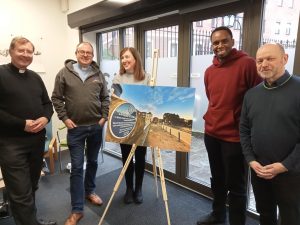