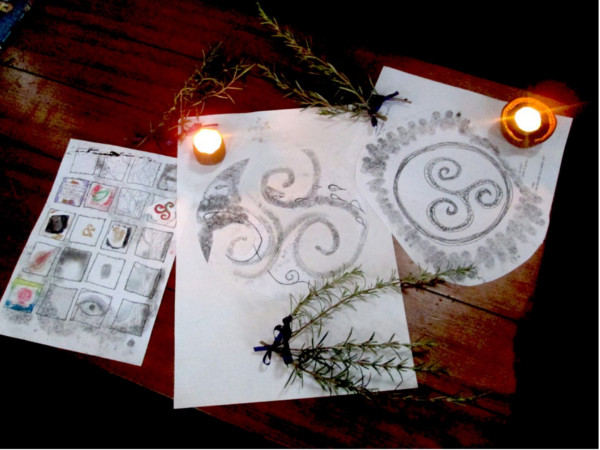 Shaeron Caton-Rose reflects on a Wild City Retreat at Left Bank in Burley. 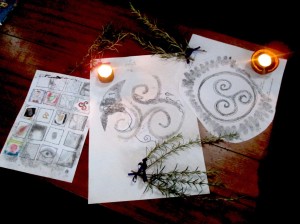 Our City Retreat went urban this Sunday, moving its usual venue to Left Bank, a deconsecrated and beautiful church building on Cardigan Road. Surrounded by terraced houses, a scrapyard, petrol station and local shops and cafes, Left Bank is a surprising space which delivers a sanctuary just a stone’s throw from a busy road and community.
Taking the theme of remembrance, we thought about ‘re-membering’ – putting together, exploring the ‘both/and’ rather than the either/or’ as Richard Rohr puts it, and the idea of intentionally paying attention, as in ‘re-member’ (‘forceful mindfulness’). The turning of the seasons, the festivals of light and darkness such as Harvest, Samhain, All Souls and Halloween, all remind us of the delicate balance we live in as part of the natural world. We looked at the ‘triskele’ – an ancient Celtic symbol of for the cycle of life which has multiple meanings such as death, birth, rebirth, mind, body, spirit and creation, destruction and preservation.
In Burley Park, the council have installed a signpost with a nice drawing showing a map of the park and what can be found there. Layer on layer of graffiti has almost eradicated this. The desire to make one’s mark, to create something somewhere of significance is a human desire which has led to some of the greatest cultures on earth. It has also led to war, materialism and the consumption of the earth’s resources. We are all responsible for how we affect our neighbourhoods, our communities and the effect this has on our earth.
Thoughts and ideas that were common were the need to relinquish control of our lives and allow a pattern to emerge, even when it is not the one we planned ourselves, and that the process of being broken, and times of transition, can actually be creative opportunities. We also thought of those people and the gifts of the natural world which become invisible to us and to others when they are considered unimportant. We remembered the need to attend to our sacred moments, our sacred lives, our sacred earth.
Surely this is vital now, in a year of surprising and even unsettling changes which are leading us all into an uncertain future. We do not know how our communities, our environment and our city will be affected by the current political landscape for sure and there is a concern for the increasing numbers of those made ‘invisible’ by our prevailing consumerist culture. The easiest thing to do in such circumstances would be to ‘eat, drink and be merry, for tomorrow we die’. But as people of faith we are called to consider the deeper themes: the promise of spring after winter, the return of sunshine after darkness, the seeds that lie buried for centuries which, given the right conditions, will rise to life.
The challenge we felt is that it is not just waiting for those seeds to find their way to the light, but to engage actively in their hope-making. Thinking about the white feather as an alternative symbol of the war hero, we asked ‘What do we stand up for? Or do we go with the flow?’ The dichotomy of relinquishing control yet standing our ground sounds contradictory but this is the both/and of the circle of life and the cycle of the seasons. What marks are we going to make on our earth? Will we cover up its beauty with our disinterest and selfishness or will we become part of its glorious pattern?