A Poet Theologian on a Seesaw 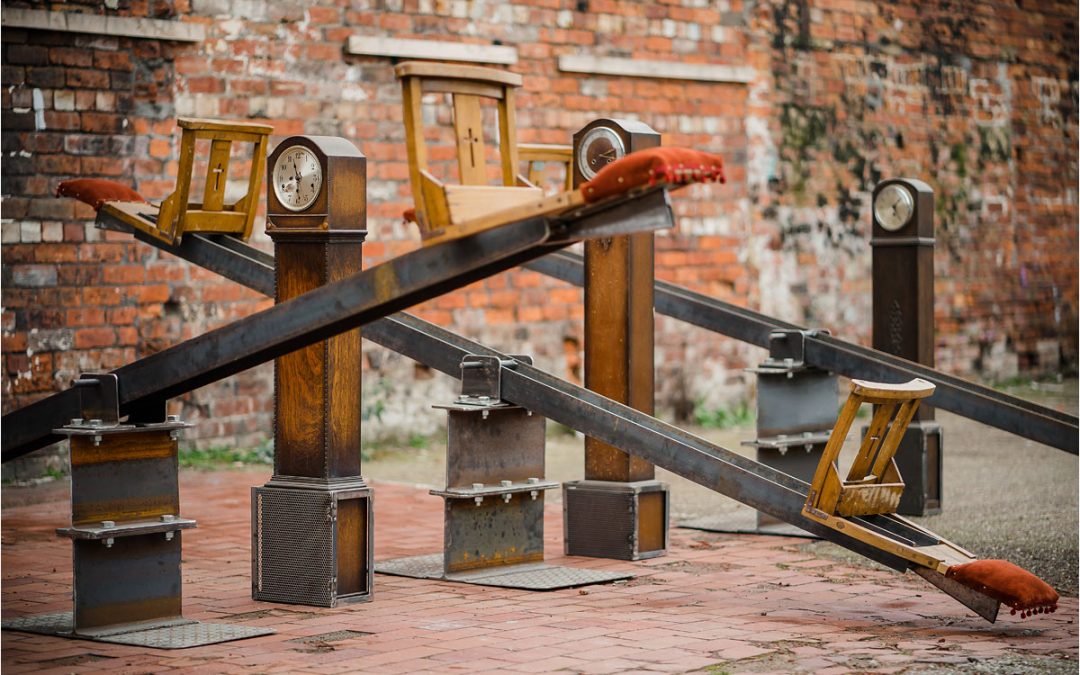 A couple of weeks ago I spent an absorbing couple of hours in St Edmund’s Church, Roundhay. It is a fine building; I’ve sung lovely music there, and know various people connected with it. But this was no mere social or overtly religious visit; I was attending a guided viewing of Hungarian artist, Leon Varga’s latest interactive exhibition, The Way Up Is Down, sponsored as part of LCI’s cultural offering to (and from)the people of Leeds. During the pandemic, the idea of ‘interacting’ with people, and being allowed to touch objects became an alien, almost forgotten experience. But for many people it is how they can best appreciate certain art forms, especially sculpture (and I often wonder, when art galleries or museums make special efforts to introduce interactive elements to keep children engaged, whether it’s okay for us older folk to bring along our ‘inner child’ to enjoy the same haptic highs!) And, as we will all remember, during the pandemic not being allowed to be in the same room as someone else, except in very limited circumstances, was a tough call. We learned to adapt, and learned about zoom and facetime. What a delight it was, then, to gather together, to sit round a table and be led by theologian Charlotte Naylor-Davis in reflections on Leon’s installation, and then be required to touch it and sit on it! Over coming weeks I will be responding to it, both in its first home in a church, then as it travels round Leeds, to a berth in the post-industrial haven of Sunny Banks Mills, and on to Armley.

The website shows you something of the art work, but it really has to be experienced, with others, to be understood. Leon constructed three long sea-saws, with padded seats at each end which were from reclaimed church chairs. Along the length of each sea-saw were positioned three long clocks –may be not so much grandfather as grandmother clocks, each of which had belonged to someone who had died during the pandemic. Our task was to sit on the sea-saw, and rock up and down, and think about what all of this might mean. The participants had plenty to say in response to this experience.

I’ll feed in some of these ideas in coming weeks, but for now here are some initial thoughts that came to me, as I gently pushed myself up and then down on a gentle summer evening, in a lofty church building. Some of the clocks still had their hands; some had bare faces. None of them still ‘worked’ in terms of telling the time, but a few chimed gently with the up and down motion of the humans sitting before them. The clocks obstructed the view of the person on the other end of your sea-saw, with whom you were collaborating in this up and down motion.

I tend to process experience through the lens of poetry and music, and an immediate connection was made for me with John Dowland’s lute song ‘Time Stood Still,’ from his Third Book of Ayres, 1600 , which interweaves a single human voice and the sound of the air passing through the sounding box of the lute (rather as the clocks ‘spoke’ as they moved) in some brilliant word painting. Of course it is a love song, and its general message is not dissimilar to that expressed in the final lines of the slightly later poem ‘To His Coy Mistress’ by Andrew Marvell (1621-1678):

‘Thus, though we cannot make our sun

Stand still, yet we can make him run.’

Here is a poem I wrote, about some of those things, and no doubt a few other bits and pieces! Within music, ‘harmonics’ is a description of the physical effect of an ‘overtone’ or additional notes produced which is incidental and additional to the note played – it is produced by the vibration of a column of air, or a string, or even the wood of the instrument itself.

Somehow, though we spoke, we were silent.

Lacking the presence of the ‘other’ to resonate with,

we became muted; our words floated into the ether

with their glass faces, we covered our mouths:

Yet in those days of cloudless blue

that scrolled like an infinity of children’s summer holidays,

in those dark nights of the soul, when we wept

and there was no-one there to dry our tears,

we heard each other, heard the voices

joining in the music of the spheres,

and then, we were present, touched

to our very hearts, by love’s own grace.