“And there was no more sea” Hannah Stone’s weekly reflection 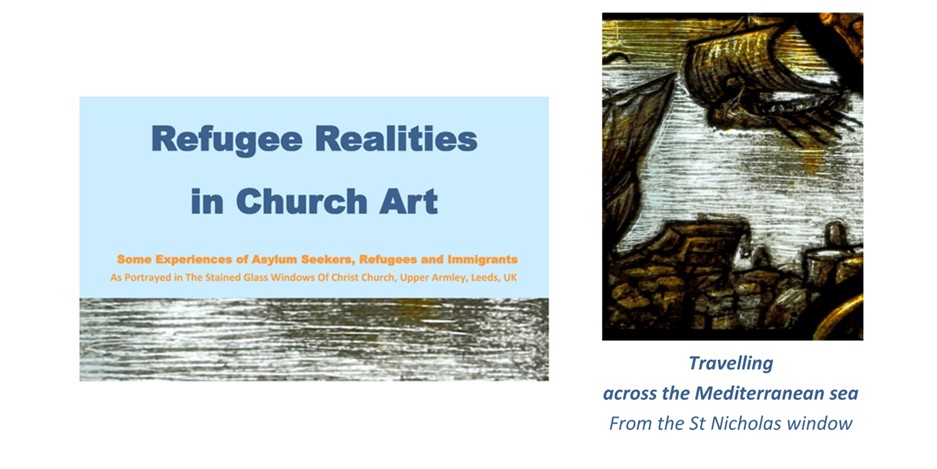 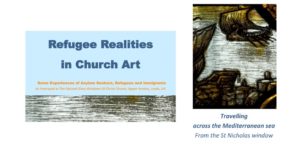 Thinking again about refugees, I’m very struck by the portrayal of the Mediterranean sea on the cover of the booklet, Refugee Realities in Church Art (it’s from the St Nicholas window in Christ Church, Upper Armley).The sun is glinting on it, and the waves look like no more alarming than skeins of silk. Maybe some of you can remember beach holidays looking at seas like that (though probably not this summer!). The reality can be very different. St Paul’s missionary activities involved much perilous travelling across this sea; he was shipwrecked in Malta (Acts 27.1-14), and refers to this in 2 Corinthians, 11.25, among other tribulations such as being beaten, and pelted with stones. ‘I spent a whole night and a day adrift in the open sea,’ he tells us. What a terrifying prospect.

In modern times, the risk of sea travel has diminished, where there are adequate safety measures and experienced sailors. But, as we know, many people seeking asylum take huge risks crossing oceans to find a new life. Why would they do this? The definitions given in the Refugee Realities throw some light on this: ‘An asylum seeker is someone seeking international protection but whose claim for refugee status has not yet been determined. A refugee is someone who has been recognised under the 1951 Convention relating to the status of refugees to be a refugee. They may wish to return if conditions improve. An immigrant is someone who has chosen to live or settle in a country other than their country of origin.’ Behind these clear words lie many varied and often contested stories. People risking drowning are looking for somewhere better, safer, a new start. Rev 21.1 suggests a whole new life, one that replaces the old one: ‘Now I saw a new heaven and a new earth, for the first heaven and the first earth had passed away. Also there was no more sea.’ How glad people must be to step onto dry land again. Sometimes they are welcomed.

A few years ago I was invited to read some poetry at an event aimed to raise money for refugees. I hope it reached some of the people who needed it, that they found at least a new earth if not a new heaven.

from a koto, spinning sounds

into the corners of a room

where we sit on bathroom stools,

or cross-legged on rucked rug,

His fingers, picking the strings,

dance on their wooden stage.

The poets are palimpsests

that flow seawards, where fish

When we are full of music,

the room holds only stillness.

We all have homes to go to,

but first we must empty our purses,

to fill pots with coins and notes,

as treacherous as the oceans.