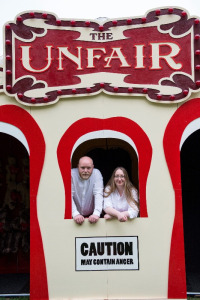 Ellie Harrison talks about losing something precious and first impressions.
I’m a Leeds based performer, artist and mentor of young people. Since 2010 I have been making a sequence of seven art projects called The Grief Series that create spaces where people can discuss death and bereavement through a range of empowering creative practice. I collaborate with photographers, performers, funeral directors and fairground sign writers.
Two weeks ago, we were all packed and ready to take our project The Unfair to Brighton Festival after a fantastic reception in Leeds when our van, containing the majority of our set was stolen.
The Unfair is a free funfair filled with stalls and games that allow people to consider if anger could be a positive as well as destructive emotion. Because it’s free and welcoming, it gets an audience that might not usually engage with contemporary art. Groups of lads. Young mums wanting a rest and some conversation. And I am constantly surprised by people… by their generosity and honesty. It’s taught me to beware simplicity. People are always more kind, compassionate and complex than they first appear. What you might think at first glance is hostility, is more often than not exhaustion, or worry, or simply them thinking. Whilst the Unfair was playful on the surface, people have been engaging in profound ways with the work and we were all looking forward to bringing it to new audiences in Brighton.

Up until now, grief is something I have only known for people, not for things. Someone described me as an ‘experiential expert in death’ which I suppose is a fancy way of saying I have lost a lot of people. My mum died when I was 17 and over the next 5 years I lost my brother, father and two stepbrothers. So grief for my family is something I have sat with for a long time. But I will hold my hands up and say that, however ugly it is, I feel grief at the theft of the Unfair. I swing wildly between feeling resilient and telling myself ‘it’s just stuff’ and thinking ‘It’s not just stuff, it’s the late nights in the workshop painstakingly painting fairground signs, headachey from paint fumes. Or the early mornings in charity shops seeking the perfect blue glass bottles to house people’s angry letters so we can ‘Bottle it up’ for them so they don’t have to. The objects that made up the Unfair were there to show that we cared.
The grief, I suppose, is really for the space The Unfair created. A space for people to come together with people often quite different to them and reflect. A space to unpack some difficult feelings. The grief is because of the young lad who was prompted to ring his mum and try and patch things up as a consequence of experiencing The Unfair. Or the women of faith who found release from a difficult time at home by doing our ‘angry karaoke with a punch bag’. The grief is for all the future conversations we might not be able to have about how and why people feel angry. And people do feel angry.
The recent terror attacks have well and truly put my grief for The Unfair in perspective and made me grateful for not having experienced the horrendous trauma that many families are experiencing at the moment both in the UK and around the world. Whenever there is a tragedy, there is a risk: that we stop condemning the individuals involved and start making assumptions about large groups of people. The battle lines are drawn and it becomes a series of ‘Us and them’ arguments. The ‘them’ might be people on the other side of the political spectrum or people from the other side of the world. Or people on the other side of the street who we assume aren’t like us. We divide. Us vs them. Good vs bad. But if the Unfair has taught me anything it is to beware simplicity.
People are rarely all bad and never have I met someone who doesn’t possess flaws. Most people are a complex combination of factors and experiences and although we know we shouldn’t, it can be tempting to write people off. To jump to anger when we feel a deep sense of grief. I know this because when I lost my brother in 2002 I felt angry at the unfairness of this young man dying. And over the past few weeks I felt angry at the people who stole The Unfair and as I searched the waste grounds and tips of Leeds, my face probably looked hostile. I probably looked critical of everyone I saw. I have wanted a place to rage at the world. To express anger. But underneath the anger, it was grief too and I was lucky because I have been on the receiving end of kindness. Through my work on Grief Series, Churches, Mosques and Synagogues have invited me in, despite the fact I might be a little different to them. Bereaved children have invited me to share memories with them and shown me precious inherited objects from their loved ones. Widowers from the highlands of Scotland have sent me teapots made by their late wives as gifts. When The Unfair got stolen we have had so many kind offers of help and donations to our crowd funder. I’m glad people saw past my angry expression, any surface differences and invited me in. Gave me space and a little understanding. I would like to continue to build these spaces for other people. To create spaces of possibility, that don’t jump to easy answers and embrace complexity.
To find out more about The Grief Series go to http://griefseries.co.uk/