Can cities be good, and green? 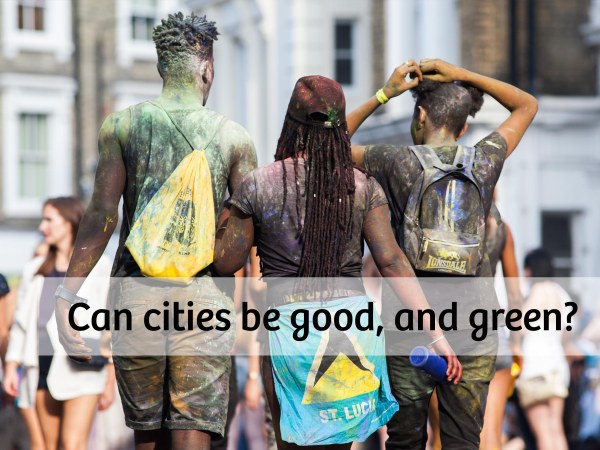 I don’t know about you, but we get a fair few Jehovah’s Witness leaflets through our doors down in Beeston. They always carry a version of the same image of diverse people in verdant nature. It looks like a return to the Garden of Eden. I don’t mean to be mean as they seem like nice folk and it’s nice dreamy stuff, but I think they’re missing a trick. Whilst Scripture starts in nature (the Garden, in Genesis 2-3), it ends with a city (the New Jerusalem, in Revelation 21).

In between, it’s fair to say that many of the writers of Scripture take a fairly dim view of cities. There is Babel/Babylon of course which is an archetypal centre of all things wrong. Then there’s God’s judgements against Sodom, Gomorrah and Nineveh. For many of the prophets, like Isaiah and Ezekiel, critiquing the cities of their time was standard fare and both Jesus and Paul deliver scathing criticisms of certain cities and aspects of urban life. The cities in the Bible largely become symbols for inequity, disconnection, immorality, corruption, violence and rebellion.

Meanwhile, so many of the positive and most memorable Scriptural stories, the ones we tell in Sunday Schools, are pastoral. Think of Abraham, Jacob, Moses, David and others wandering around in the countryside, as well as all those references to sheep and shepherds, Micah’s Mount Zion, John the Baptist, Jesus’ beatitudes, his forty days in the wilderness, his ascension and so on. It’s all very rural.

This means that for many of us, we associate the countryside with good things and cities with the bad. It is a primal memory that has become etched on our collective psyche. We are at best ambivalent about cities. It is also true that in Leeds, and other places that are similar sociologically and geographically, Christians collectively drift towards the countryside or the suburbs (the almost countryside). Why wouldn’t we, when that’s where YHWH is, waiting for us in the Garden? But is that right, or is YHWH actually calling us back to the city?

I like a good walk in the rolling countryside as much as the next person. We all long for tranquillity, for the quiet day. But YHWH seems perversely interested in the city, and we flee it at our peril.

What has this to do with the environment and sustainability? A generation ago, many of us were led to believe that environmentalism was a niche hobby and a wholesome lifestyle choice. Increasingly, it’s becoming apparent that it, or at least the kind of environmentalism that might possibly just save us from ourselves, demands a radical (literally, ‘from the roots’) and complete shaking up of society. It requires a realignment of priorities, a restructuring and a reordering. We might even call it a repentance.

Perhaps that sounds too much like an intangible and impossible revolution, and yet I was really struck a few years ago by the introduction to the Transition Towns Handbook. In it, writer and environmentalist Rob Hopkins makes the case that, whilst we do need new technologies, new political systems, and much more besides, developing a deeply sustainable culture starts with each of us, and our relationships.

He argues that in order to respond generously and creatively to the multiple challenges we face in the coming decades, we need to be nurturing trust, hope, love and other similar assets in our neighbourhoods, our communities, our towns, and cities. Out of these assets alone can spring cooperation and innovation. Then, come what may, our chances of making a Good Society are much improved.

That’s where the city comes in. We should all be rightly sceptical of the city: it has a long history of being a place of tyranny, of a special kind of consolidated oppression and depression, of dirt, corruption, collective alienation and seats of power. As with cities, we are worried by power. But (to summarise a great book called ‘Power and Love’ by Adam Kahane) we need to hold love and power in delicate dynamic balance if we want to achieve any kind of meaningful change in the world. Each one without the other is toothless.

Cities are full of power and also of potential in a way that the countryside can never be. Lots of people are here, rubbing up along one another, raw, tired and dirty. Cities are complex, it’s often difficult and conflictual, but the potential for change, for a different kind of society to burst out, is here.

And not only is the raw material (that is, us, the people, full of power) here, but so too are the conditions. The closer we live in physical proximity to one another, the greater the potential for the intermingling of ideas, for cooperation and for interdependence. These act like chemicals forced together in a test tube.

Getting down to brass tacks, a heaving city affords us rich opportunities to travel together, to learn together, to eat together, to work together: to share and to collaborate. That’s why in industrialised countries, people living in cities have a 40% average smaller Carbon Footprint than those in the countryside.

But we all face a challenge here. In our individualising culture, we are each an island, but YHWH invites us to something very different. To trust, to need, to share, to cooperate and to fuse. At base, these are the underpinning tenets of what we need for a more sustainable society.

I believe YHWH is calling us back to the city, daily. That will mean different things to different people. But in summary, it’s to choose to grapple with the Other, with ‘dirt’ (read Kester Brewin’s wonderful ‘Complex Christ’ book for insights on the Dirty Gospel and much more) and with interdependence more than charity. And as we do so, we will find ourselves participating in the co-creation, from the grassroots up, of a richer, more relational, more creative and more sustainable society.

If our vision of the heavenly endgame is either a party in the sky or a pastoral paradise, our environmentalism will probably always be tokenistic, like an add-on or individualistic hobby. That’s not terrible, but not the enthralling, radical and eternally sustainable New Jerusalem, that I believe YHWH is calling us into. How can we each help to build that enthralling, radical, sustainable city, starting here today?

Jonathan Bartley, Hook Lecture 2018, Working For The Peace Of The City