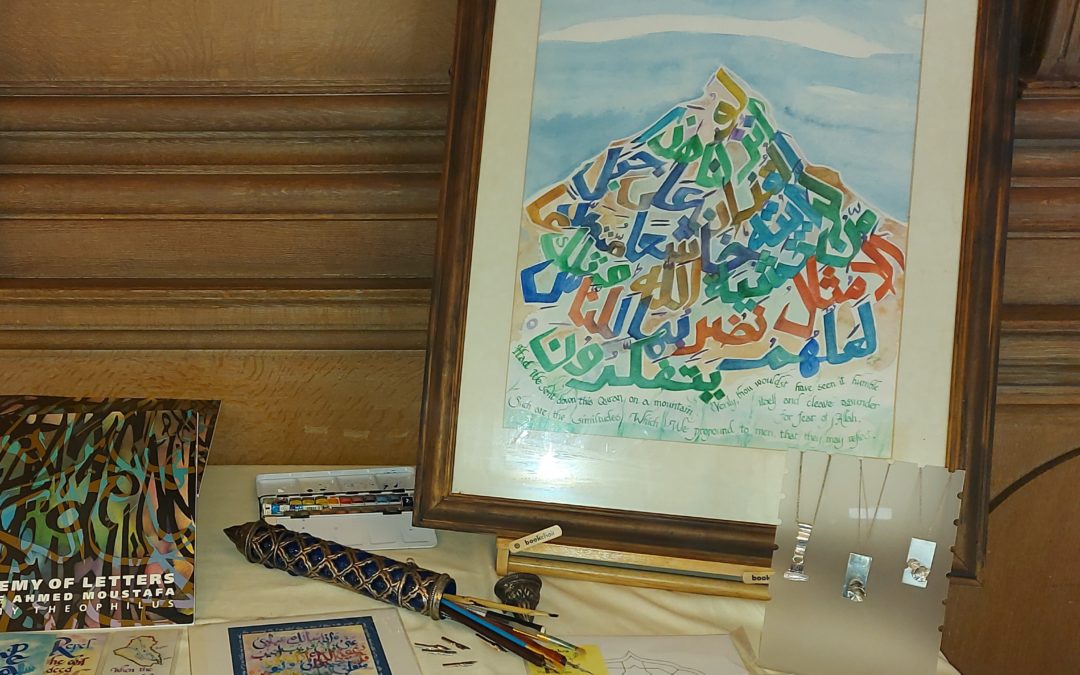 Fauzia kindly joined us at a multi faith event in Leeds to share her reflections on the topic of when Religion makes the News and tell us a little about herself and her experiences.

My academic training has primarily been in the sciences, where I read physiology and pharmacology after which I went on to do a PGCE and then to teach science and maths to adults and children.

I am primarily a self-taught calligrapher and I first started learning calligraphy as a child when I was given a calligraphy set by my parents and have been doing it for over 35 years. Once given the set, I then ran with it and I learnt the three main scripts, in addition to the Irish Celtic script.

In Celtic art I found that that the design motives used to decorate or illuminate the scripts had similar origins to that found in Islamic art, such as key work and knot work, which uses geometry in their construction. I also saw the beautiful illumination in the manuscripts such as the Book of Kells and the Lindisfarne Gospels, all books of religion and again I saw similarities in the way the holy scripts were illuminated in other religions.  I also saw for the first time Hebrew texts in the British Library as well as Quranic texts. These were similarly lavishly decorated with gold and colours including the intense blue of lapis lazuli which were brought over from the East to Europe and used in biblical manuscripts. I started seeing commonality between different civilisations and became fascinated with design and illumination.

Whenever I do a piece of calligraphy, I try to find words that mean something to me and that I would like to communicate to others. These can be from Quranic scripts, poems, sayings, any text that I find that may convey something that I want to express such as an idea or an emotion. I have exhibited nationally and locally, including at Manchester Met Uni, Leeds Uni and Salford Uni,  as well as at Leeds City Library Art Gallery. I also exhibited at the first Islam Expo, the World Museum Liverpool and worked with Manchester Art Gallery on a project in 2006. In addition, I have undertaken work with community groups both locally and nationally doing workshops introducing Islamic art and calligraphy to those groups and have worked with a Turkish calligrapher, Efdaluddin Kilic organising Islamic calligraphy workshops for him.

My first love will always be calligraphy because it illustrates and decorates the written word which is the most powerful form of communication, and which is able to conquer hearts. As the saying goes, the pen is mightier than the sword.

I chose this piece (see image) because out of all the pieces that I have done, this is the most pictorial and it has a powerful message. It is a short end passage in a chapter in the Quran called Al Hashr (the Exile) and is verse 21. It reads:

Had we sent down this Quran upon a mountain, you would have certainly seen it humbled and torn apart in awe of Allah. We set forth such comparisons for people ‘so’ perhaps they may reflect. (Meaning of translation from The Clear Quran by Mustafa Khattab, available on www.Quran.com)

It is formed by using brush and pen lettering stylized to form a mountain in Arabic lettering and the English lettering is combined with blades of grass below. I mainly use watercolour, Gouache and inks in my work and the piece has been done on watercolour paper.

The title I gave this piece was ‘What Should Be the State of Our Hearts’ and the verse was chosen not just because it speaks to all of humanity but because I felt it was directed towards Muslims in particular. A scholar once reflected on this verse and said if the Quran had been sent to a mountain and it split itself for fear of the responsibility of receiving this message, then what should be the state of our hearts? I found this to be a very profound statement. I felt it was an important message for my own community because often I find the message is misinterpreted or not adhered to and this is sometimes reflected in the treatment of women, the elderly or other community members or used to justify certain wrong actions. I believe the message is often misinterpreted by the media as well and there is double responsibility to make sure the religious message is not misconstrued because it is this that then leads to Islamophobic attacks. In addition, the verse that I have used is a precursor to the following verses which then go on to describe the attributes of God.

“He is Allah – there is no god ‘worthy of worship’ except him: Knower of the seen and unseen. He is the Most Compassionate, Most Merciful.” (22)

“He is Allah – there is no god except him: The King, the Most Holy, the All-Perfect, the Source of Serenity, the Watcher ‘of all’, the Almighty, the Supreme in Might, the Majestic. Glorified is Allah far above what they associate with him ‘in worship.” (23)

“He is Allah: The Creator, the Inventor, the Shaper. He ‘alone’ has the Most Beautiful Names. Whatever is in the heavens and the earth ‘constantly’ glorifies him. And he is the Almighty, the Wise.” (24)

Thus, after pointing out the enormity of the responsibility of receiving his message, Allah asserts his complete sovereignty over his creation by describing some of his attributes. It can be said then that, this is a large substantial section of the Quran.

The question was asked, why is it important for the media to show art from faith artists and engage with faith artists?

Representation of cultures and religions is important in the media because it allows communities to learn about each other and engage with each other. Faith artists could have a role to play in this but are rarely promoted in the galleries with much of historical faith art being reserved to be shown in museums, especially where Islamic art is concerned. When invited to teach Islamic calligraphy to a school in Manchester as part of a gallery project, I was told “we don’t want Islam the religion, we want Islam the culture”.

How you can teach Islamic calligraphy without teaching about Islam? The religion is beyond my comprehension and the comment shows the prejudice one faces when dealing with certain institutions. It seems that if you fit a certain secular image then you will be shown as an artist but if you come from a religious background and talk about your faith within your art then you will not. It is important therefore, that the media engages with faith-based artists because the media is a vehicle that should facilitate all communities to learn about each other. Contrary to the image that the media portrays, there are many more people who profess to belong to a faith and practice it and the number of faiths in this country reflect the many different nationalities and cultures they originate from. This rich variety of cultures and creed make up the rich fabric of our society and should be celebrated.  For my part as a faith-based artist, I use my art to engage with people from different backgrounds so that we can learn from each other and live more productively with each other.