The tension between organising and faith

Leeds Citizens and Leeds Church Institute work together to employ a local Community Organiser, Becky Howcroft.  In her latest theological reflection, Becky considers how tension is something that we have to learn how to use in an effective way, something that we need to learn to live with, rather than run from.

Community organising is a way of pursuing justice that is filled with tension. We look around us, at the world as it is, but have visions of the world as it should be – and as we use organising to try and propel us towards that vision, we live in the tension between those two worlds. We actively seek to bring tension into the room when we are trying to negotiate change, recognising that change usually involves a struggle; whilst being careful to deploy that tension in a way that will achieve a deeper and more lasting harmony; the true peace (shalom) that can only come when there is justice (Centre for Theology and Community). Tension is something that we have to learn how to use in an effective way, something that we need to learn to live with, rather than run from. 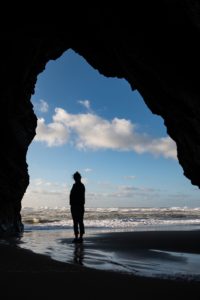 As an organiser in South Leeds, there are times when I’m involved in high stakes meetings or situations fraught with stress. In a recent relational conversation, a young person asked me ‘how do you cope with that stress and anxiety?’. I had recently been thinking about the story of Jesus when he walked on water, approaching his disciples in a boat caught in a storm. Peter’s reaction was to jump out of the boat and walk towards him, making good progress until he remembered what was going on around him, took his eyes off Jesus – and sank. I reflected back to the young person about how having faith in Jesus means that he is the one I want to focus my life on, so that when the storms come, when the situations become stressful – they do not overwhelm me as my eyes are on Him, not the storms. Obviously, this is much easier said than done as often the storms are quite intense and I feel absorbed by them. When organising around issues which massively affect people’s lives such as social care or basic safety, it can feel like the storms are too great to bear.

As an organiser though, I also am trained in how to navigate through those storms – and come out of them with tangible change. Community organising places a great deal of emphasis on building relational power to give you the ability to win change – so being both focused on power building is key to being a successful organiser. There is also great thought given to strategy, political intelligence and effective action – pursing forms of public action that will bring change.

This is where I think Christians involved in organising have to work hard to be able to deal effectively with another form of tension – the tension between placing trust in Jesus, the founder and perfecter of our faith (Hebrews 12: 2) and focusing on successful organising. I have found that organising is a tool that really, actually, practically works in terms of bringing about social change; in developing leaders; in challenging injustice. When you find something that is so effective and you’ve tried so many things which aren’t as effective, it’s very easy to become consumed by the practice of that thing, to place your faith, energy and effort into it. But the reality is, Jesus is Lord, organising is not! Whilst relational power brings ability to make change happen, God is the ultimate source of power.

However, it is equally easy to completely spiritualise the fight against injustice, to abdicate our responsibility for action; for building power; for developing leaders, with our expectation being that God bears the responsibility for these things. We pray for unjust situations – but do not get involved in them ourselves or invest any time in our own learning or training as to how to act effectively in them.

The challenge for me as a Christian, is to find that tension between becoming an effective organiser for change and living a life which reflects that belief that Jesus is Lord. Saul Alinsky said that ““If people don’t think they have the power to solve their problems, they won’t even think about how to solve them.” Structural problems can feel completely overwhelming – in South Leeds our members are campaigning on structural problems that are felt over the country – racism; a broken social care system; unsafe streets and safeguarding issues. In some ways it would be easier to pray for God to answer the problem and leave it at that- with large structural issues, we often don’t know where to start in terms of being involved in tackling that problem ourselves.

The reality is that organising does give us a place to start – it does give us real power – so investing time in it, in its learning and practice, in the development of leaders is important if we want to be true to our call to seek justice. It’s also a reality that organising creates an opportunity to bring Christian leadership into the public decision making sphere, and build and exercise power in a way that is true to the character of the Christ we follow and the Kingdom we are trying to build. Is that an opportunity that we want to let pass us by?

But how do we focus on Jesus to keep us walking on water, rather than solely trusting in the organising? I think there is an interesting conversation to have here around how churches integrate discipleship teaching (which is often largely classroom/discussion based) and prayer with practical action. Jesus, after all struck a good balance between teaching, storytelling and sending his disciples out to do specific, practical tasks – learning to trust him on the job as it were.  When launching a significant campaign in South Leeds, two church leaders who were co-chairing the event took some time out beforehand to pray – and they had previously been trained in community organising and had put a good deal of time into preparing a plan of action for the event, again praying through those plans. Local church members had been praying for the event beforehand and attended the event to pray during it. This was an event soaked in both organising and prayer. I found this practical demonstration of faith in relation to effectively seeking social change; one of the most powerful testimonies I’ve experienced in my work as an organiser.