Time to speak out? by Becky Howcroft, Leeds Citizens

“Speak up for those who cannot speak for themselves, for the rights of all who are destitute. Speak up and judge fairly; defend the rights of the poor and needy.” Proverbs 3 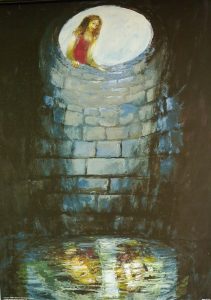 In the early days of my own journey of faith, this was a strong motivator for making my voice heard in rallying against systemic injustices. I have come to understand, however, that people in difficult situations don’t need me to speak. Rather, it is more effective for people to be empowered to speak for themselves and their community. I love the story of when Jesus met the woman at the well, and simply sat with her. There was no large miracle in this story, just Jesus being his authentic self, listening to this woman, drawing out her story and encouraging her to act in response. It was a transformational encounter.

At times when I have delivered training sessions about this, people have felt uncomfortable with the words, “fight” and “power”. They tend to be people who already hold power, perhaps due to their class, their economic status, their race or gender, or sometimes a combination of the above. But the reality is, that if things are to change structurally, the “needs” of those “in need” is for their fellow citizens, their fellow community members – to stand with them, to build power with them, to fight with them.

I personally feel that this is a really important part of Christian mission. When I look at the life of Jesus as a whole, I am provoked by a God who didn’t simply come to meet our needs, but rather came to be with us. One of the Messiah’s names is after all, Emmanuel, God with us. What did God being with us look like with Jesus in his day-to-day life? We can read the stories that he told, his teaching and his three year journey towards the cross and resurrection. But between those stories is the 24/7 life lived with his 12 disciples, a life lived with people, in relationship. And so, we are called to follow his example and seek to “be good news” as well as “preach good news.”

Community organising means being with people, it does not mean organisers stepping into the breach, speaking up and solving problems. It means being with people in difficult situations, building relationships with them, standing with them, and fighting with them when they are weighed down by systems that are failing them. Addressing structural social problems and tackling social injustice is hard. It requires work, and it requires a fight. From my experience, the people who really want to fight for change recognise that being “nice” doesn’t get them anywhere, that what they in fact need is power. These people are often those who have really suffered from the results of injustice and a lack of power.

“What if, through our action of standing and acting in solidarity, we were able to invest in and support those who currently cannot speak for themselves…?”

People who currently lack power haven’t been given the tools speak for themselves effectively. What if, through our action of standing and acting in solidarity, we were able to invest in and support those who currently cannot speak for themselves, to be able to do so in an effective way? The reality is that by standing with them, we give their voice power. By investing in them, in training and in organising so that their stories are really heard and acted on, we give a voice power.

There is a danger that if we don’t also consider the importance of standing with those who currently don’t have a voice, they will forever be unable to speak for themselves. That’s a really unhealthy situation for anybody to be in, and incredibly disempowering. It is time to see this change in Leeds.