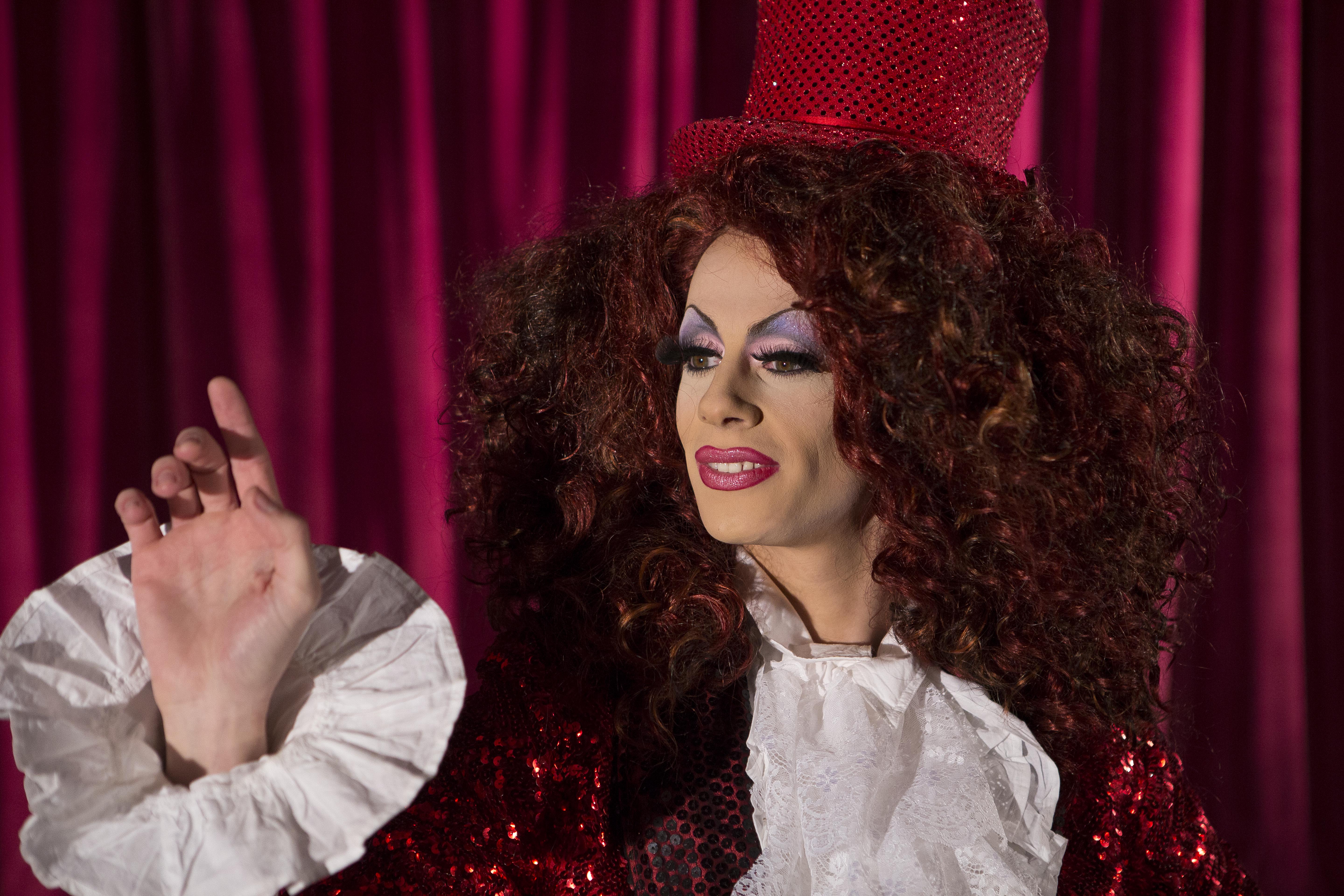 Who are you? No really, who are you? Identity is a slippery thing. Perhaps a lot more slippery than humans have thought for most of our existence. Is identity something innate or something we can decide? Who gets to decide? When a parent or teacher tells a child that they won’t amount to much, is that really who they are? Jamie Fletcher’s Alphabet Club is an exploration of this theme by taking a multi-perspectival view of one of the most contested identities in our culture: gay.
Working with friends, volunteers and the remarkably gifted actor and drag artist Owen Farrow/Divina de Campo, Fletcher has created a series of vignettes that are in turn amusing, jarring, confessional, enticing and transcendent. Melancholy too. Because, like most stories about a sexual identity other than straight, it is a story about alienation, about otherness, and about what it feels like to take on a word like gay and the liberation and expectation that comes with it.
If you are over 80 gay once meant jolly. If you are a bit younger than that gay carries the baggage of JohnInmanpartiesKennethWilliamsAIDSFreddieMercurypromiscuityLiberaceisolationLarryGraysonpoofterponcenonce. If you are under 20 gay means lamestupidjustdontdoit. Imagine being 13 and taking on that word.
Because gay comes readymade and pre-packaged. According to Alphabet Club, you don’t get to decide what it means, you wear it. We are all involved in what it means to be gay. Simply having same-sex attraction may be (more than) enough to exclude you from all sorts of places, but it might not be enough to make you ‘gay’. The film explores the rejection caused by unwished-for otherness, but also the way that a label brings a continual negotiation with one’s own sense of self.

Alphabet Club handles this love-hate relationship really well, opening up with a funny dissection of gay tropes that is both affectionate and lightly mocking, offering the audience an immediate entry into a world that may be different, but also feels all-too-familiar. Is gay really about sexuality at all, or is it rather a lifestyle, a gang, an identity? In a world where the late 20th century stratification of mods and rockers, soul boys and new romantics, indie kids and hip hop fans seems to have petered out, gay identity, according to Alphabet Club at least, retains the excitement of a youth cult.
And youth cult movies follow a predictable path: whether it be Quadrophenia or Saturday Night Fever, our protagonist is an outsider, a loser redeemed by belonging. Even if he has a dead-end job and a dysfunctional family, when he is in his world he is a prince. But soon the rules of the gang and the imperfections of its members begin to undermine the fantasy and following one trauma after another our (anti)hero emerges into adulthood battered, bruised and wise.

This is not the narrative arc of Alphabet Club, if a montage of comedy, talking head prose, contemporary dance and drag opera can be said to have a narrative arc. Perhaps that is because its director, writer and principle actor are all still young men. They are still part of a ‘gay scene’. But if they ever did grow out of the scene (and there are signs of a certain knowingness in the film), would they be more or less gay? More or less themselves? It’s not clear whether Alphabet Club knows what the denouement of this tale will be, but as an attempt to allow the audience into the mind of a young man as he finds his way to an identity he can own (and perhaps one day love), the film is a resounding success.
The slipperiness of identity is imaged through the medium of contemporary dance. Here we have a form of communication which has set rules and forms, but is nonetheless open to interpretation by the audience. Certain repeated moves are almost mime-like in their literalism, while others remain densely symbolic. When movements first made by a single dancer are then repeated in a later scene by a group, we are left to wonder at the motivation of the collective: do we imitate as an act of solidarity and sympathy, or are we merely copying so we can belong? The ambiguity of the movement perfectly reflects the ambiguity of the subject matter.

Here is another label: Christian. The director grew up as a Roman Catholic and walked away from his faith as a teenager when it became clear that his identity as gay was incompatible with his identity as a Christian. There are echoes of this struggle in the film, but the church is not singled out for particular opprobrium. Clearly in the 1990s the voice of the church was just one of many that brought shame and humiliation into a young man’s life. Today Jamie is happy to own the label Christian, and while this film doesn’t address his own journey back to faith, it provokes many questions nonetheless.
Every community creates rules, boundaries, artefacts and rituals. Alphabet Club explores how these play out in the context of a young man coming out and making his way in the world. It’s almost as if Fletcher is at a stage of his own maturing that he is seeking his own identity in tension with all of the labels attached to him, including his gay identity. One can only imagine that he feels the same way about being called a Christian.
Perhaps, rather than tightly bounded sets, Fletcher is advocating seeing identity as a series of overlapping clouds, which sometimes interact in creatively new ways. As a pastor and theologian one is left wondering where God’s word resides, the biblical idea that God sometimes gives us a new name (Matt 16:18), or changes our circumstances so dramatically that the names people call us are transformed (Isa 62:4). Alphabet Club is suspicious of all names, but I remain hopeful that somewhere out there is Jamie Fletcher’s true name, spoken over him by God.
Article written by Simon Hall for the screening of Alphabet Club on Thursday 6th November 2014, 7-9 at LCI
Watch the trailer for Alphabet Club
Jamie Fletcher’s website
Alphabet Club website