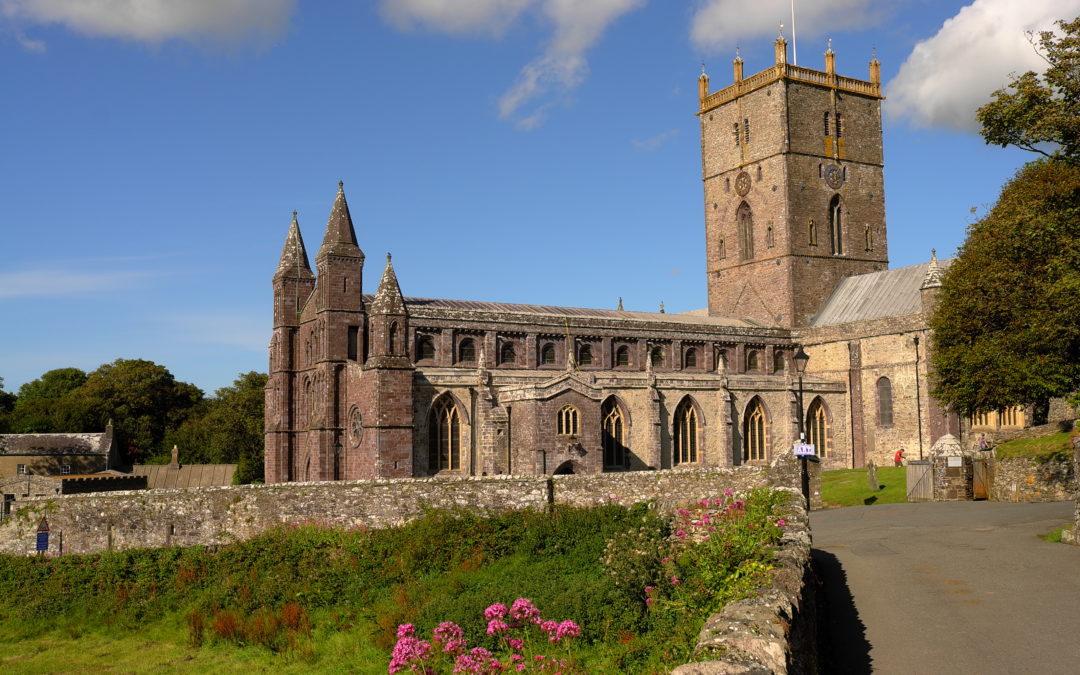 This week Hannah Stone, our Poet Theologian, is focusing on pilgrimage, as an example of the ‘experiential and emotional’ dimension mentioned by Ninian Smart, though it contains elements of the ritual, material and other aspects of religious practice.

I recently visited St David’s Cathedral, a place I’m deeply attached to, having spent a decade singing choral evensong annually for a summery week, as part of a visiting choir. I became a lifelong ‘friend’ and read in the annual report  the address given last year by Dr Dee Dyas, an expert on pilgrimage with whom I worked at York University’s Centre for Christianity and Culture. Their work, designed to engage with the experience of visiting churches, includes a lot of 3-D modelling of churches, and downloadable apps to accompany and interpret visits to churches. Dee cites an account from a steward in Durham cathedral who was startled by a man standing in the nave of Durham Cathedral with tears running down his face. When asked if he was alright he shouted (at God, the steward felt) ‘I’m a secular person! But there’s something here that’s getting to me! But I’m a secular person!’

The power of the numinous, that sense of something special, something greater, is powerful. Today’s poem comes from research I did for the CCC, linking a material artefact with some human responses to it.

The photo shows a skeleton

stretched alongside a measuring rod,

terminating at one end with an absence

in place of a skull,

at the other by knee high boots

splayed at ten to two.

I examine his boots.

Page 13 of the guidebook

offers a helpful diagram of the left one,

It details the parts – the vamp, the rand,

the heel stiffener and the sole.

It numbers the stitches per centimetre,

Evidence shows he did not die in these boots,

and that he wore no hose

when he was dressed for burial.

No proofs are offered of how it felt

to walk in these boots.

Did he stoop for his cockleshell on an Essex beach

or a sunbaked strand? For what sins

was he atoning? Was he a spiritual mercenary,

accepting coins to erode his joints

as he erased the misdemeanours of a brother?

Lacrimis Christi! Did he hope for stigmata,

Or were these the honourable badge

Of a true penitent? Decades of journeying  are marked

in his worn right shoulder, which shows

just how he grasped his iron-tipped staff

to assist an ascent of some hill or other.

Patient, he noted the nigglesome stone under his heel.

Humbly, he waited in line for his dole.

But whether it was Spanish sun or English snow

which finished him off, we cannot know.

Pilgrim, peering into the glass case,

of your mercy, a prayer, or, if you will,

a candle to light him home.