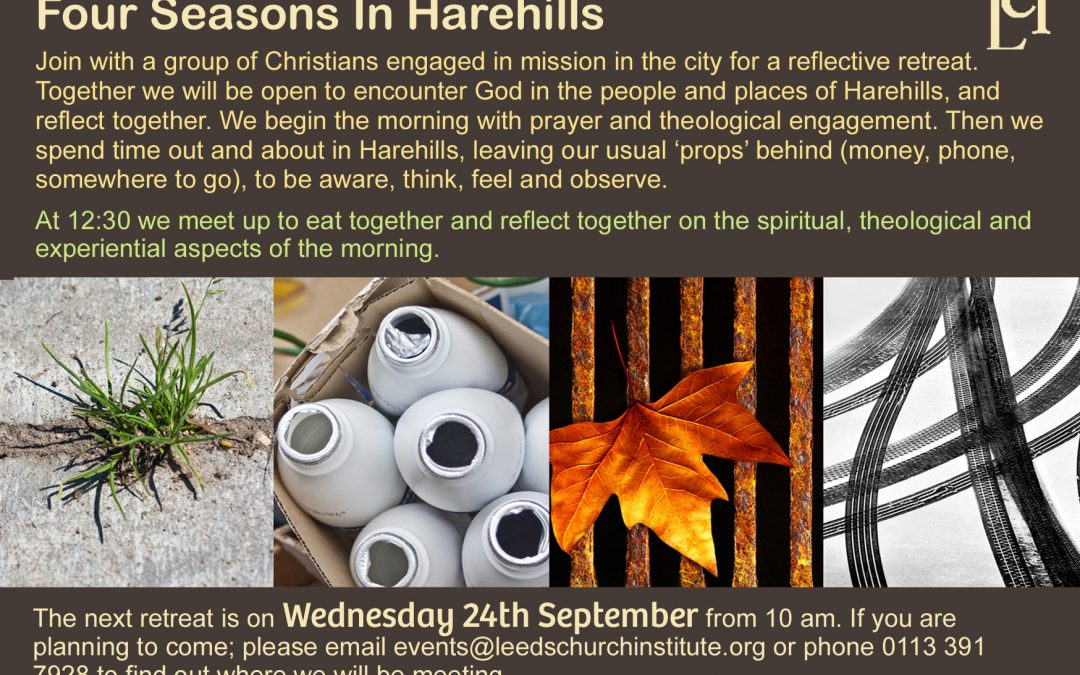 Four Seasons in Harehills
A Blog by Stroma McDermott
Four Seasons in Harehills takes place once a month, with people who live both in and outside of Harehills meeting to pray, walk and reflect on their encounters both spiritual and physical within this significant part of the Leeds City locality.
This walk began a season of firsts for me; my first blog about my first day with LCI and my first ‘Four Seasons’ walk.
To be honest I arrived at Trinity Methodist Church on Roundhay Road suitably excited, nervous and clueless, not really sure what I was coming to. As with any new thing there was an air of hope and risk. Whilst we had officially entered Autumn the welcome and hospitality I receive had a distinct glow of Summer about it and immediately put me at ease. For those who find walking into new situations difficult be assured that hospitality, a true gift of the Spirit is alive and present in Harehills.
We began with the sharing of a simple yet reflective prayer before going out. Each person could choose their own path, own direction and we journeyed independently. Interestingly we all went very separate ways, some on a trail taking in different places of sacred worship, some taking in places of public importance and I headed towards the main road simply to wander.
There were many things on that walk that made a great and I have to say lasting impression on me. The flyer suggests that we “encounter God, people and the places of Harehills”; bang on. In the wandering there was wonderment.
From the weeds cracking through the cobbles, the endless bustle of the taxi-cabs, cars and buses, to the many people purposefully on the go, this was a place of creative energy; a place where the Spirit broods, covers, creates and brings life. The sheer level of energy in the places and people I saw was impressive. There was a sense of God bursting out all over, a people and a place of breakthrough. A Genesis place.
Don’t get me wrong there was mess and brokenness all around but even in that there was a sense of life coming through. The mattress thrown into the alley was an unsightly obstacle but whoever had owned it was maybe better off for having chucked it out of their immediate environment and freed themselves into new and airier space. The barred windows juxtaposed with the freedom of the drying laundry out on show and the children’s toys and chalk drawings left on the doorstep all signposted to the chaos and fullness of life behind four walls.
Two items, close by each other at the start of my walk stood out as symbolic of what can be the physical and spiritual reality of a place like Harehills. One was a pile of overly ripe bananas and the other a bush, merrily fruiting with bright red berries. The bananas had clearly been left in the hope that whilst they were still edible someone would use them, a readymade gift for the taking; but nobody had and all that goodness seemed wasted. The bush on the other hand was clearly an old hand at surviving the climate, the pollution, the litter and the birds. Slowly and without fuss it was flourishing and looking forward to a sustainable future for itself. It reminds me that sometimes it is in the wrestling and the struggle that the real fruit appears and lasts. Sometimes when things are given we learn little from them.
Harehills as I found on my walk is a place of struggle and wrestling, but in the wrestling it encounters and in the encounter it is flourishing. From the towering minarets at the top of the hill to the reggae rhythms of the church café at the bottom, God was richly and diversely represented and encountered. God honouring the wrestling with presence, as the hope and expectation of the many peoples prepares a season of fruitful enterprise.
Kingdom;flourishing;incarnation;presence