Power to the People, Profile of Jenya Stashkov 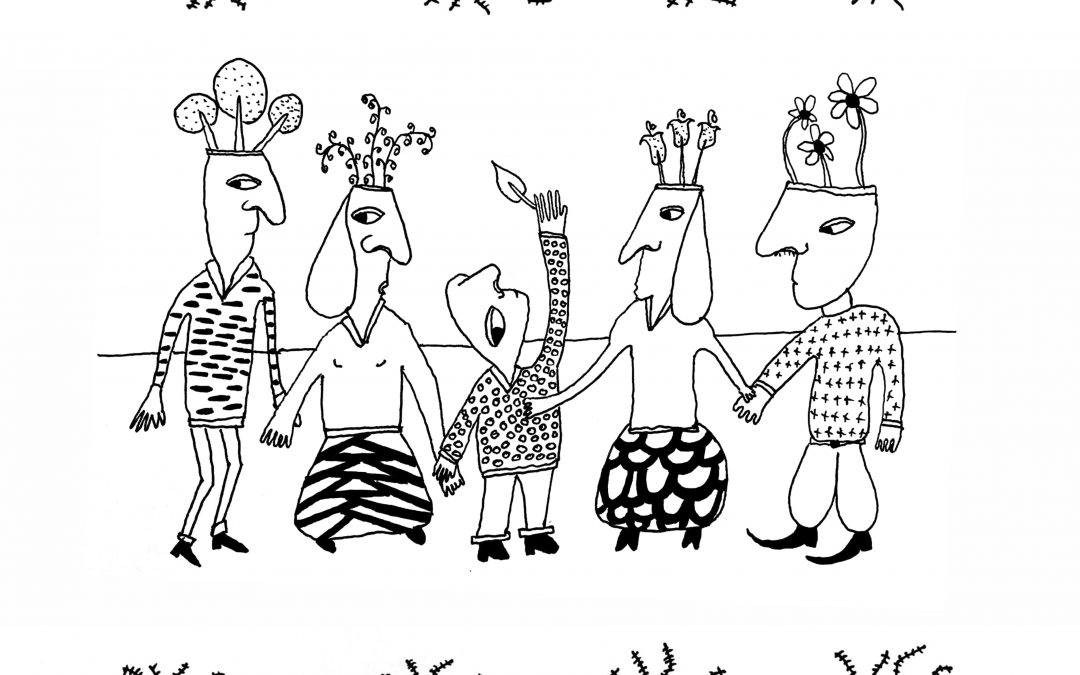 Welcome back to readers of these blogs, after a protracted Christmas and New Year break. As it turned out, although this year we swerved an official lockdown over the festive season, I imagine many of you shared the rather fractured and anxious Christmas I experienced, with the lottery of negative/positive lateral flow tests of visitors shaping days that were hoped-to-be relaxing family times.

For my penultimate ‘power to the people’ blog I want to introduce you to Jenya Stashkov, whose quirky and engaging art work you will have seen in the latest edition of City Theology. A thirty year old Russian citizen, Jenya describes himself as an ‘artist, illustrator, playwright, poet, performer and kulturtrager, who has been working in visual arts for over six years.’ I love new words, and the concept of the ‘kuturtrager,’ (one who transmits ‘culture’ especially to the generations following), intrigued me. I have an aversion to the practice of ‘influencers’ who may occupy a similar space in terms of enticing the population to be inspired by and adopt their choices, because this is so inextricably linked to commercial reward. No-one wants artists of any description to be starving in attics/basements/wherever, but there is a risk and a sense of adventure in living a life informed by artistic endeavor. As those of us who work freelance know, this can bring rewards of all sorts – financial, reputational, professional and sheer personal satisfaction – but it can also be an insecure means of existence – especially in cultures which seek to limit freedom of speech or action. Maybe being an artist of any sort is an existential empowerment, a bold flag waved not in surrender but solidarity with those who lack the ability, confidence, or opportunity to speak for themselves, whether in words, music, art or other modes of expression.

I was privileged to encounter Jenya’s work, and to first commission it, as part of a collaborative project I took part in called Electrifying Women, jointly supported by the University of Leeds and the Women’s Engineering Society to celebrate the centenary of that august body in 2019. It is well known that women are (still!) under-represented in so-called STEM subjects (science, technology, engineering and medicine) and my involvement with the project was to edit a series of volumes of creative writing celebrating the achievements of the often unsung, unknown women who had been involved in engineering over the last century and more. We aimed to empower them, if only post mortem! The third of these volumes, Things Fall Apart, was a lighthearted anthology of writing for which the brief was it must be funny, it must feature a disaster of some sort, and it must have some basis in historical facts to do with women and science. Yenya’s artwork for the front and back covers added further empowerment to the creative work encompassed within it – and maybe, in writing about women from previous generations, the poets published within it were themselves ‘kulturtragers’ of a sort?

I was thrilled that one of the contributors recommended Jenya as the artist to provide images for the covers of the pamphlet. He and I corresponded to try out ideas and he was inventive, rapidly responded to suggestions, completely entered into the spirit of the ‘niche’ endeavour we were engaged in. So I met Jenya initially through his work – perhaps the best way to get to know a creative. By way of background, I can tell you that he is a Bachelor of Socio-Economic Education (Historical Profile) from Nizhny Tagil State Social and Pedagogical Academy (Nizhny Tagil, 2010 – 2014), which he followed with an internship in Sverdlovsk Regional Museum of Local Lore, and advanced study. His work has featured in international exhibitions in New York, Shrewsbury, Birmingham and Malta, and during the lockdown he was very active making work for on-line exhibitions in the UK, India and Austria. In addition to the work published by Leeds Church Institute and the Electrifying Women project, Jenya has an international profile of work as a book illustrator. You can find links to his work here.

Thank you for reading, and I wish you a peaceful, empowered and creative 2022.