What attracts churches to Leeds Citizens? 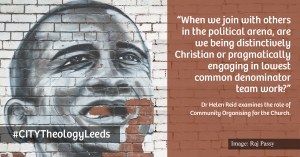 What attracts churches to Leeds Citizens?
Dr Helen Reid asks how participating in Community Organising can be a distinctively Christian endeavour.
Perhaps the most common way Christians seek the welfare of their neighbours is through the pastoral care of individuals, families and groups, in contexts ranging from the local to the global. These approaches do not often have an intentional political component, and many Christians are wary of getting involved in ‘politics’. An awareness of our calling to seek earthly peace in the here and now, however, has led many local Christians to pursue other options too. One that is gaining ground and developing impact in Leeds is Community Organising through the movement of Leeds Citizens. Many churches, and Leeds Church Institute, have become members of Leeds Citizens, along with Muslim groups and a synagogue, Trade Unions, educational institutions including a university and several schools, and community-based secular groups. When we join with others in the political arena, are we being distinctively Christian or pragmatically engaging in lowest common denominator team work?
Community organising is a movement that involves people living in urban settings, and particularly those who find themselves excluded from the mainstream. It is about diverse groups of people building relationships and sharing in actions that improve life locally for all. Its most famous practitioner is Barack Obama who has previously worked as a Community Organiser.
Community Organising certainly speaks to our Gospel concerns to include the marginalised when seeking justice and peace. Luke Bretherton (a faith-based activist and academic) also argues that it is supportive of our Christian distinctiveness. Using examples from Abraham and Jeremiah to Jesus and Pentecost he shows that Christians have an essential calling to be hospitable to the ‘other’ or the ‘stranger’. Community Organising can be the tent for Christian hospitality, the place where we can get to know and seek the common good with those who are different to us.
Community Organising actively invites people of faith to participate as people of faith, recognising that belief and worship is not an ‘additional extra’ but intrinsically of value. This approach supports churches to guard against worship being seen as simply generating an interior motivation for being better citizens. It is conducive to seeing worship and the reading of Scripture as an opportunity to be open to God’s involvement in the world. When we are aware of worship and Scripture as covenant, not a tool or something to be achieved, it can be our primary experience of prevenient grace.
Leeds Citizens provides us with a unique and current opportunity to live out our Gospel calling that is compatible with and recognises Christian distinctiveness. This is a particular attraction to churches. Have a look at the storyline from twitter of recent Leeds Citizens actions to see how Community Organising is working in Leeds. If you would like to discuss the theology further, come to Oakwood Book Club at Oakwood Church on 28th June 2016 at 7:30 when we will look at Luke Bretherton’s book, ‘Christianity and Contemporary Politics’ which includes a chapter on Community Organising. This article draws on Luke Bretherton’s work.