May we be good neighbours to each other 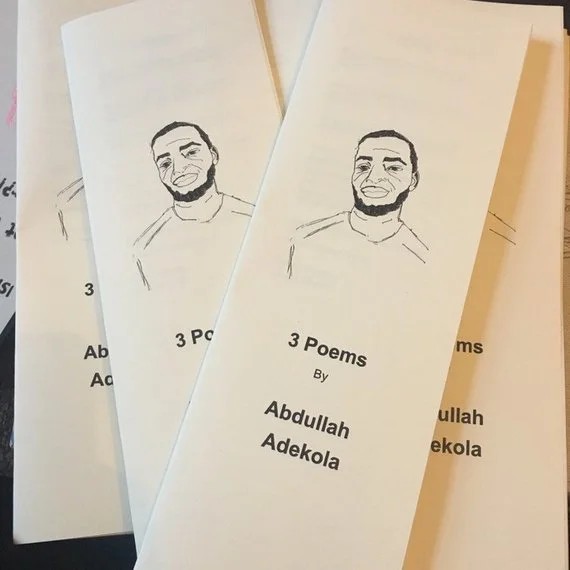 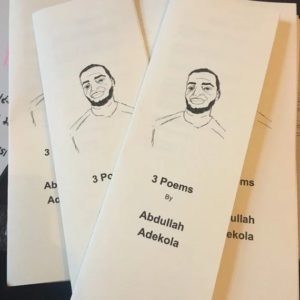 This is the greeting that came with 3 poems by Abdullah Adekola, reviewed by LCI’s Director, Dr Helen Reid, and Revd Tom Lusty, LCI member and Vicar at St Giles in Bramhope.

3 poems by Abdullah Adekola @adekolapoetry, is published by Bradical: a self publishing project with the aim of promoting brown writing, artists and Bradford @BradicalPress availabe at adekola.bigcartel.com .  You can hear Abdullah read his poem ‘Neighbourhood Library’ published in the anthology And The Stones Fell Open: A Leeds Poetry Anthology available here.

“I loved reading these poems. The titles tell their own story in capital letters: POEMS LIKE PROPHECIES, FIVE MINUTES OF FOOLISHNESS, LOVE IS MY MISSION. The poems are personal and political, gentle and ambitious. They speak with a disarming honesty about growing up round here in terms of personal experience and growing political reflections.

Faith is central to the poems, and it is not faith that gives all the answers and makes life easier. It is a faith that gives insight and challenges the listener. Adekola’s expression of faith is infused with black identity and heritage; and it is filled with hope.  Hope for a better life but with no anticipation of a simple happy ending. The poems are happy to look wryly at life, seeing the big picture is enough to sustain making a contribution to the greater good. The poems feel like an invitation to looking at life this way.”

“I enjoyed entering into Abdullah’s world. It is a lyrical world, a gracious world, an honest world. Poems like Prophecies end with a celebration of black identity as “spiritual … never a curse … a compliment”. These strong messages are reinforced throughout the second half of this poem. “To all black people / God bless your life” … “Black people have flair and flavour”, concluding with the memorable “Black … is a consequence / of God’s confidence in me”. Abdullah has real confidence in his arrangement of material as a poet.

The final poem Love is my mission has the refrain “The same faith that inspires me / is the same faith that could expire me”. In all three poems faith is key but there is an ambivalence about having faith. You get the sense that it is a risk worth taking because it gives Abdullah his core identity.”